Home Archives Subscribe
What's Your Strategy for the Next Decade?
Western Games In Japan: The Importance Of Localization

Blogging Vs. Microblogging: Probably Not The Winner You Are Thinking About

So it seems that Twitter's growth is slowing down in the US and around the World, while blogging platforms are going strong.

The guys at TechCrunch only mention WordPress in their article, leaving out the great move by Typepad last week, when it started offering a free service that allows anyone to create their own blog in a matter of seconds -- a compelling platform for creating, sharing and distributing content across multiple sites.
It is worth noting that users around the world are also using Facebook and other Social Networks as their virtual blogs.

In summary, and probably thanks to the Social Networking Era, users are writing and broadcasting their own content, or even reblogging, more than ever.

Only a year ago, the conventional wisdom was that blogs were dead and microblogging would soon replace them. Twitter was supposed to kill blogs because it’s so much simpler to publish one sentence fragment at a time rather than whole thoughts bunched together into what is known in the trade as “paragraphs.”

Today, blogs are doing fine, while Twitter is struggling with flattening growth, at least to its Website Twitter.com (clients like Seesmic and TweetDeck have seen no slowdown). The weakness Twitter has been experiencing in the U.S. since last summer is now finally hitting its worldwide visitor growth as well. 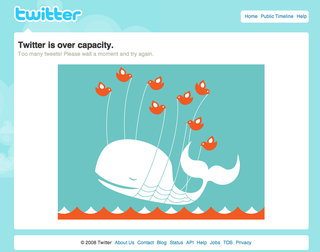 Classic "Fail Whale" on Twitter.com when things are not working.