Global Competitiveness Report 2009-2010: Not Much Has Changed With The Recession

Continuing with the focus on Brazil from the previous post, the Latin American giant continues the impressive upward competitiveness evolution started last year, gaining eight positions, overcoming Russia for the first time, and partially closing the gap with India and China among the BRIC economies.

Overall, not much has changed with the recession, apart from the US loosing the first position. It's also interesting to note that the biggest economies are not always the most competitive ones - see the case of Singapore, most competitive country in Asia, as a clear example.

Switzerland tops the overall ranking in The Global Competitiveness Report 2009-2010. The United States falls one place to second position, with weakening in its financial markets and macroeconomic stability. Singapore, Sweden and Denmark round out the top five. European economies continue to prevail in the top 10 with Finland, Germany and the Netherlands following suit. The United Kingdom, while remaining very competitive, has continued its fall from last year, moving down one more place this year to 13th, mainly attributable to continuing weakening of its financial markets.

Below, two examples of indicators from the Report, showing the importance of Innovation and Technology. Also worth noting is how how close the two countries are in terms of Macroeconomic (in)stability: 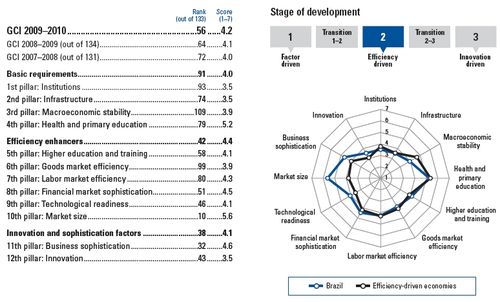