A great (and long, as usual in their articles) piece by Thomas L. Friedman published in the New York Times Sunday Magazine. Although published originally in 2005, Friedman's ideas accurately represent the current trends in Globalization - and with the appearance of Social Networks like Facebook and other websites and technologies that focus on user-generated content, maybe it's even more so than a few years ago. 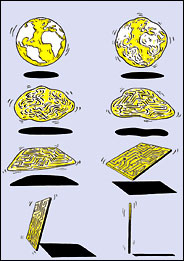