Globalization Trends In 2009 - The Effects Of The Recession

Findings of this report raise some interesting questions. Could it be that the global financial crisis really provoked this change of focus? Was the flip in attention an indication that managers had the wrong priorities on the global trends?

In 2009, managers are extremely interested in the latest consumer trends, the fragmentation of consumer groups and the channels they can communicate through. They are curious about the macro-level too, such as which countries and sectors are expected to grow and contract in consumer spending, why and until when.

To a lesser extent, they are looking into the economic power shifting from West to East, the macroeconomic impacts of the recession, the US economy, and the growing protectionist attitudes of political leaders. The managers of 2009 are also interested in technologies. They want to know which ones are coming and how businesses are interacting with them in order to be prepared for new growth opportunities. Linking back to consumer spending, they particularly want to know about communications technology. 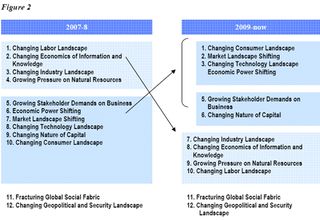 In comparison to 2007-2008, a curious reversal of trend priorities has occurred: the top trends of 2009 were hanging down the bottom half of the trends ranking ladder in 2007 and 2008. They switched places almost exactly with the top pre-crisis trends.