Home Archives Subscribe
Global Competitiveness Report 2009-2010: Not Much Has Changed With The Recession
Facebook Allows Page Owners To Target News Feed Stories By Location and Language

Corruption At Home And Abroad: Something To Have Into Account

We live in a corrupt World. Or, at least, that's the perception of the World's population. And, many times, perceptions are what make the reality. The 2009 Corruption Perceptions Index is a great source of information, for companies planning on doing business internationally, and even for people thinking about moving to a new country.

As the world economy begins to register a tentative recovery and some nations continue to wrestle with ongoing conflict and insecurity, it is clear that no region of the world is immune to the perils of corruption, according to Transparency International’s 2009 Corruption Perceptions Index (CPI), a measure of domestic, public sector corruption released today.

“At a time when massive stimulus packages, fast-track disbursements of public funds and attempts to secure peace are being implemented around the world, it is essential to identify where corruption blocks good governance and accountability, in order to break its corrosive cycle” said Huguette Labelle, Chair of Transparency International (TI).

The vast majority of the 180 countries included in the 2009 index score below five on a scale from 0 (perceived to be highly corrupt) to 10 (perceived to have low levels of corruption). The CPI measures the perceived levels of public sector corruption in a given country and is a composite index, drawing on 13 different expert and business surveys. The 2009 edition scores 180 countries, the same number as the 2008 CPI. 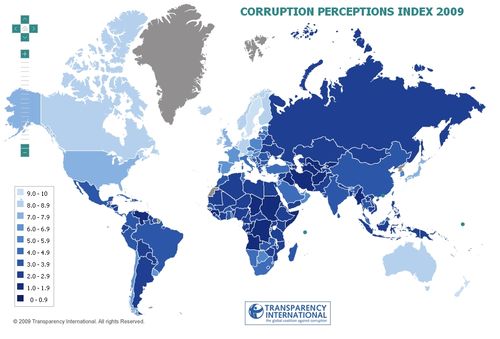 The Corruption Perception Index (CPI) published by Transparency International measures the perceived levels of public-sector corruption in a given country. It is a composite index drawing on different expert and business surveys. The scale is from zero (highly corrupt) to ten (highly clean).