Even with a slowdown in their user growth, Facebook is still taking on Europe as a storm. The slowdown could be explained by multiple reasons, from the lack of good statistics to the maturity of the European market.

Before we look at the countries that grew the fastest, we should note that this is a big slowdown in growth from the 10 million the region gained in October. However, we believe that our numbers are lower than what Facebook is actually seeing. We obtain data from Facebook’s advertiser tool, which provides the company’s estimate for its current traffic in a given country, but the numbers provided may be delayed by days or weeks.

Turkey gained the most users in November, with slightly more than 1 million new monthly active users. The country now has 16.3 million monthly actives, or 23.1% of its more than 70 million citizens. Germany, Italy and the United Kingdom all gained more than 400,00 new users. Growth tapered off from there. Denmark, Switzerland, The Netherlands and Spain actually lost users. 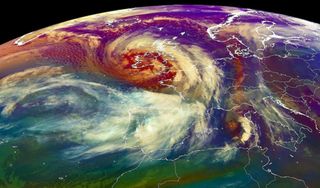 Satellite image of a storm over Europe -- The Facebook Storm