Globalization: New Approaches to New Markets Or How The Bottom of the Pyramid Strategies Are Paying Off

This is a good interview with C.K. Prahalad, author of a book on new approaches to Globalization and the relevance of the bottom of the demographic pyramid.

Nevertheless, when I read about "pyramids" and "globalization", I can't help it but remember that there is a very prominent Pyramid in the design of one Dollar bills, marking the "American Era".

Five years ago, C.K. Prahalad published a book titled, The Fortune at the Bottom of the Pyramid, in which he argues that multinational companies not only can make money selling to the world's poorest, but also that undertaking such efforts is necessary as a way to close the growing gap between rich and poor countries. Key to his argument for targeting the world's poorest is the sheer size of that market -- an estimated four billion people. How has Prahalad's book -- a revised, fifth-anniversary edition of which has just been published -- affected the behavior of companies and the well-being of consumers in the years since its publication? Knowledge@Wharton checked in with the author for an update, including examples of specific companies that are implementing Bottom of the Pyramid strategies.

Read a transcript of the conversation at the Wharton website. 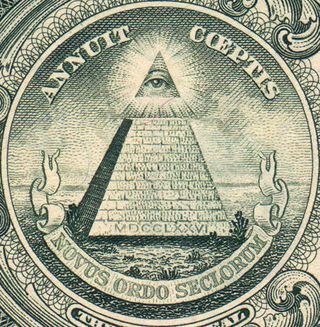 Detail of the esoteric Pyramid appearing on the One Dollar Bill. From Wikipedia: unfinished pyramid of 13 steps, topped by the Eye of Providence within a triangle. At the base of the pyramid are engraved the Roman numerals MDCCLXXVI (1776), the date of American independence from Britain. At the top of the seal stands a Latin phrase , "ANNUIT COEPTIS," meaning "He (God) favors our undertaking." At the bottom of the seal is a semicircular banner proclaiming "NOVUS ORDO SECLORUM" meaning "New Order of the Ages," which is a reference to the new American era..