Twitter (Continues) Growing Around the World: More Than 60% of Accounts Are From Outside the US

Twitter continues its global growth, being used by individuals and by mainstream media companies around the world. Anyone can now learn in real time about earthquakes, music concerts, traffic jams in our city, floods in Brazil or in Indonesia, breakfast menus of our aunt or friends, and much more thanks to Twitter.

over 60% of registered Twitter accounts come from outside the US. There are Twitter users in the large countries you'd expect, some smaller countries you might not expect (like the Vatican City) and even one in outer space. 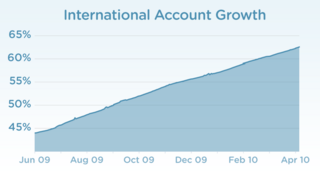