The United Nations Environment Program and the Renewable Energy Policy Network for the 21st Century today reveal in a pair of new reports that despite an overall financial downturn in 2009, global investments in sustainable energy increased worldwide. Core clean energy investments from private and public sources totaled $162 billion.

For the first time, private sector green energy investments in Asia and Oceania, some $40.8 billion in 2009, exceeded that in the Americas, at $32.3 billion. But private sector investment in Europe was down 10% at $43.7 billion.

Apart from the fact that China has spent more than the US in clean energy, it's interesting that, "around the world, venture capitalists and private equity investors spent $4 billion on energy-smart technologies like storage and efficiency. That’s more than they spent on any other clean energy sector in 2009. By spring 2010, government spending on clean energy began to slow, somewhat, thanks to a new phase of the economic downturn, volatility in the market and governments facing pressure to cut their deficit". 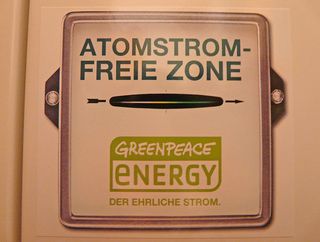 Photo of a clean power outlet from the Greenpeace energy cooperative. Customers pay to a producer who is operating several hydro- and wind-power stations. Image by Matthias (Some rights reserved).