The top 20 countries on the Internet, and what the future might bring

Looking at the evolution of emerging markets like India, China, Brazil, Vietnam, the Philippines and Russia, and as the Internet penetration in these countries rise, the balance of power on the Internet will start to shift. In five to ten years, the order in the top 20 list will be quite different.

[That said, and even with Nigeria in the Top 20 list, I think the future of African countries, as their present, does not look very promising in terms of Internet usage/penetration, which can also be used as an economic development indicator].

The Internet is almost like its own world, so when you’re thinking about what countries are the largest in that world, it makes sense to count Internet users instead of real-world population.

Not only is China the largest in terms of real-world population, the country also has by far the largest number of Internet users. This may not come as a huge surprise, but looking past the absolute top of the list, there are some countries that may be unexpected residents in the top 20. 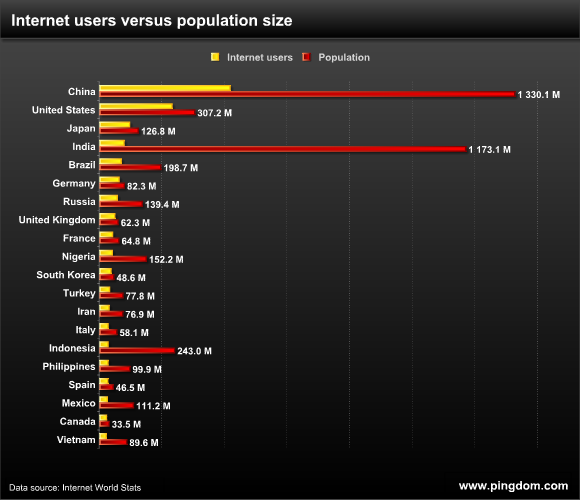 Also: There are more sites in Chinese than in English.

Many of the new users will come online through mobile devices. How will this impact content owners? E.g. stronger growth in mobile sites compared to desktop sites?

I will look for an updated list, and publish it here.