Sustaining the Future of the Internet with Hyperbolic Mapping

From time to time, we post articles related to more scientific subjects, always related to the expansion and/or future of the Internet. Today, this research shows how applying hyperbolic space mapping might help avoiding the scaling limitations that the Internet faces today.

The Internet infrastructure is severely stressed. Rapidly growing overheads associated with the primary function of the Internet —routing information packets between any two computers in the world— cause concerns among Internet experts that the existing Internet routing architecture may not sustain even another decade. Guided by a constructed map, which we show below, Internet routing exhibits scaling properties that are theoretically close to the best possible. Besides this immediate practical viability, our network mapping method can provide a different perspective on the community structure in complex networks.

We have shown that the Internet hyperbolic map is remarkably robust with respect to even substantial perturbations of the Internet topology, implying that this map is essentially static. It does not significantly depend on topology dynamics, and can thus be computed only once. This property is desirable in view of long running times intrinsic to likelihood maximization algorithms. Our method improves their running times drastically, and the Internet map computations take approximately a day on a modern computer. However, for substantially larger networks, the running times may still be prohibitive even for one-time mapping. Therefore, alternative methods for network mapping, not relying on likelihood maximization, are highly desirable, and our work in this direction is underway. 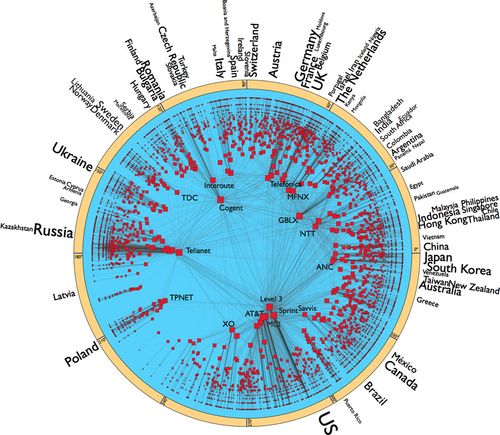 An Autonomous System (AS) is, roughly, a part of the Internet owned and administered by the same organization3. AS range in size from small companies, or even private users, to huge international corporations. No central Internet authority exists that dictates to any AS what other AS to connect to. Connections between AS are results of local independent decisions based on business agreements between AS pairs. This lack of centralized engineering control makes the Internet a truly self-organized system, and poses many scientific challenges. The one we address here is the sustainability of Internet growth.The size of AS nodes is proportional to the number of connections they have with other AS. The font size of the country names is proportional to the number of AS that the country has. Only the names of countries with more than 10 AS are included.