Home Archives Subscribe
The Future of Indian Technology and the Power of Entrepreneurship
Translating Wikipedia, With Some Help from Google

The True Size of Africa (Map)

In addition to the well known social issues of illiteracy and innumeracy, there also should be such a concept as "immappacy," meaning insufficient geographical knowledge.

A survey of random American schoolkids let them guess the population and land area of their country. Not entirely unexpected, but still rather unsettling, the majority chose "1-2 billion" and "largest in the world," respectively.

Even with Asian and European college students, geographical estimates were often off by factors of 2-3. This is partly due to the highly distorted nature of the predominantly used mapping projections (such as Mercator).

A particularly extreme example is the worldwide misjudgment of the true size of Africa. This single image tries to embody the massive scale, which is larger than the USA, China, India, Japan, and all of Europe ... combined!

Because of the way flat maps distort the size of countries (the closer they are to the poles, the more distorted they are), most people don't really know just how big the African continent is. This leads many people - and the smart and powerful aren't immune to this - to underestimate Africa's importance. The map above shows just how wrong our perception can be (unless we've already seen a map like this before). It shows that you could fit the whole USA, China, India, Spain, France, Germany, the UK, Italy, Switzerland, Japan, and Eastern Europe, inside of Africa and still have some room left. 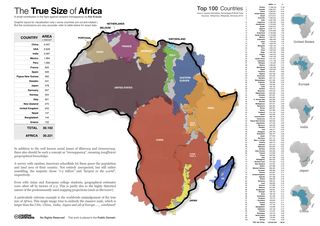 Click on the image to see its full size.

I've never been to that place. But from my History subject, Africa became interesting because of its origin, abundance in life and stories of survival.