Home Archives Subscribe
Apple Globalization: Using The iPod To Explain Globalization
Global by Design: When Designing for the World, Less is More

Languages of the World (Wide Web)

Looking at the language web in 2008, we see a surprisingly clear map of Europe and Asia.

The outlines of the Iberian and Scandinavian Peninsulas are clearly visible, which suggest geographic rather than purely linguistic associations.

Examining links between other languages, it seems that many are explained by people and communities which speak both languages.

The language webs of many former Soviet republics link back to the Russian web, with the strongest link from Ukrainian. While Russia is the major importer of Ukrainian products, the bilingual nature of Ukraine is a more plausible explanation. Most Ukrainians speak both languages, and Russian is even the dominant language in large parts of the country.

The link from Arabic to French speaks to the long connection between France and its former colonies. In many of these countries Arabic and French are now commonly spoken together, and there has been significant emigration from these countries to France.

Another strong link is between the Malay/Malaysian and Indonesian webs. Malaysia and Indonesia share a border, but more importantly the languages are nearly eighty percent cognate, meaning speakers of one can easily understand the other.

The web is vast and infinite. Its pages link together in a complex network, containing remarkable structures and patterns. Some of the clearest patterns relate to language.

Most web pages link to other pages on the same web site, and the few off-site links they have are almost always to other pages in the same language. It's as if each language has its own web which is loosely linked to the webs of other languages. However, there are a small but significant number of off-site links between languages. These give tantalizing hints of the world beyond the virtual.

To see the connections between languages, start by taking the several billion most important pages on the web in 2008, including all pages in smaller languages, and look at the off-site links between these pages. The particular choice of pages in our corpus here reflects decisions about what is `important'. For example, in a language with few pages every page is considered important, while for languages with more pages some selection method is required, based on pagerank for example. 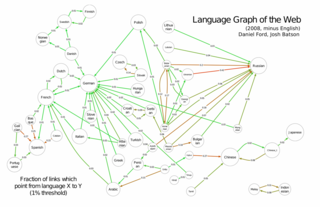 languages are nearly eighty percent cognate, meaning speakers of one can easily understand the other.