Home Archives Subscribe
Global by Design: When Designing for the World, Less is More
Mapping the Physical Internet

The concept of rooted maps is extremely useful when analyzing the process of economic, trade and even cultural globalization. Being able to view trade and economic data in a graphic way on a map is always eye-opening.

Unfortunately, the good people of McKinsey continues to apply that old offline policy of trying to sell their reports to online readers. In my humble opinion, they would gain much more (from a brand building and user engagement perspective) if they made these reports free.

No more than 25 percent of economic activity is truly global, yet visions of a borderless planet entrance many senior executives. To grasp the realities of a world where distance and differences still matter, they should develop “rooted” maps, which correct the misimpression that a viewer’s vantage point doesn’t influence the way things look. The starting point for rooted maps is to create a reference map depicting your industry environment, but not your own company’s or country’s place in it. An executive at a film studio, for example, might develop a map in which the size of countries reflects their total box office revenues and the color depicts the market share of domestic movies. 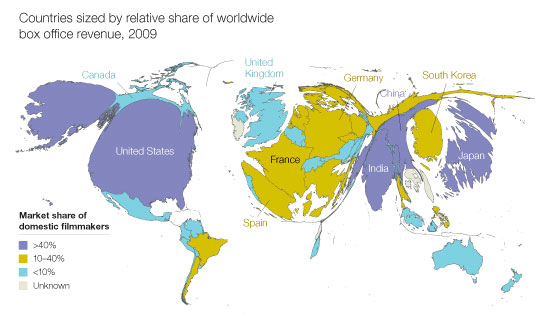