Home Archives Subscribe
Mapping Globalization
How Well Do You Know The Shape Of Countries? Play And See

A new post in our series of maps and the Internet. This time, a map that brings together the real (tubes connecting servers connecting computers connecting people) and imaginary (where people think the "Internet" is) together.

Is this the whole Internet? Of course not. But it brings us a step closer to understanding the ragged border between the virtual and physical worlds.

What should a “map of the Internet” look like? A few years ago, the Silicon Valley philosopher Kevin Kelly posed that question on his blog, asking readers to send in their answers. The drawings that came back were mostly of two camps. Some portrayed the Internet as chaotic expressions of a spidery infinity, like Jackson Pollock paintings. Others imagined the Internet as a fantastical village, drawn like a town in a children’s book. What was missing in all of them—quite conspicuously, I thought—was any semblance of real-world geography. These were maps of an imagined place; they suggested that the Internet is a landscape of the mind. 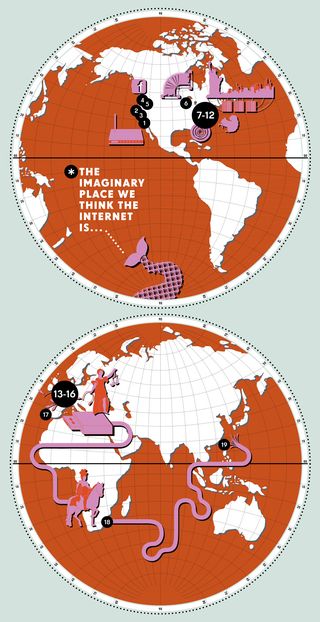