There is no doubt that globalization "can work" for poor people (or, better, for poor countries). Global integration can be a powerful force for reducing poverty and empowering people. The question of whether it "does work" is much less certain. According to Ian Goldin of the Oxford Martin School, the relationship between globalization and poverty reduction is far from automatic — and far from simple.

Globalization today is at a critical crossroads. It has provided immense benefits, but the systemic risks and rising inequality it causes require urgent action. The failure to arrest these developments is likely to lead to growing protectionism, nationalist policies and xenophobia, which will slow the global recovery and be particularly harmful for poor people.

The scope and scale of the required reforms are vast and complex. Urgent action is needed for globalization to realize the positive potential that increased connectedness and interdependency can offer. Action is also needed to address systemic risks such as pandemics, climate change, cybersecurity and financial crises.

Weak and ineffective policies taken at the local, national and global level have frustrated the potential benefits of globalization to reach the world's poorest people and dramatically exacerbated the associated risks. But when you consider crucial areas of trade, finance, migration, aid and innovation, there are accessible policies within reach that could ensure globalization reaches its potential and that the risks are mitigated.

In trade, this would include substantially increasing market access for goods and services from developing countries, while also confronting issues of arms trading and forced labor.

If the globalization train is to pull all citizens behind it, policies and institutions that ensure that the poor of the world share in its benefits are required.

Now is the time to design policies at the global, regional, national and community levels to reach the billion or more people who are currently excluded from globalization's benefits. The solution to many of the greatest challenges of the 21st century lies in more effective policies and institutions to manage connectivity and integration at all levels of governance.

Failure to act means that systemic risks will overwhelm the gains of globalization. This would be disastrous for everybody — but especially for the poor. 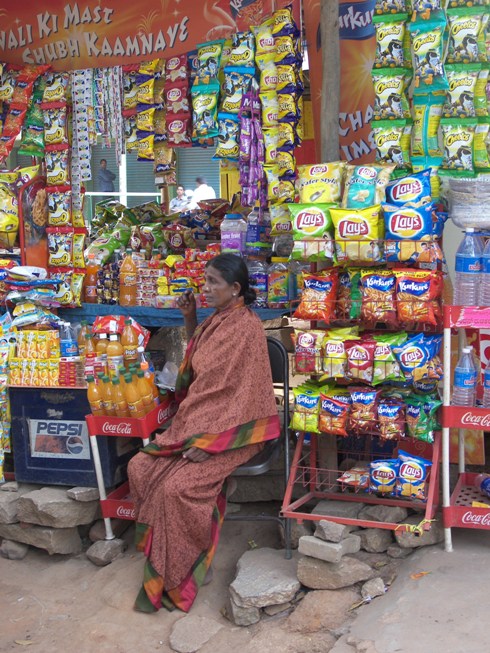 Rocks in the middle of India are shown holding up a food stand consisting of everything from Lays to Pepsi. Even a country with such a unique culture has given in to the effects of Globalization by selling foods that are usually associated with the western world.