Home Archives Subscribe
Why Country Sites of International Companies are so Bad
Globalization: What the West can learn from Asia

Globalization for All? Or Just Connections?

This article brings up an interesting issue, in my opinion. Is globalization

truly "accessible" to everyone? Are there really more trans-border business opportunities just because small companies have Facebook fans who live in a different country? Or, is it just that "connections" have been made easier?

The question is if those "foreign" connections will someday generate new business to those small companies, or will just remain as generators of "likes" - and this is not easy to determine.

uses novel data to analyze the extent of the connections and their economic impact.

Facebook, the biggest of these online platforms, has grown to a scale never before seen, and its users are increasingly international. Individuals from Canada to Cameroon can forge their own global connections, whether for business, personal ties, entertainment, education, or simple curiosity about the world beyond their own borders. MGI analysis of international ties on Facebook, Twitter, LinkedIn, and WeChat shows that some 900 million people have at least one international connection on social-media platforms (even adjusting for overlap between their users). More than 12 percent of Facebook friendships are between people living in different countries, and half of active Facebook users have at least one cross-border friend —a threefold increase from 2014.

Furthermore, MGI finds that social media plays an increasingly important role in connecting people in emerging economies to the developed world, thereby opening new opportunities for work, learning, and personal connections. The share of Facebook users with cross-border friendships is higher in emerging countries than in developed ones (54 versus 44 percent)—and it is growing rapidly, having posted a 3.6 times increase from 2014.

Beyond building personal networks and friendships, individual participation in these global platforms has important economic implications. For businesses, digital platforms provide a huge built-in base of potential customers and effective ways to market to them directly. And as social media exposes consumers from around the world to what’s available, products can go viral on an unprecedented scale. Adele’s recent hit “Hello” racked up 50 million views on YouTube in its first 48 hours, and her smash album 25 was number one on the download list of iTunes stores in 110 countries during its first week of release. For individuals, these platforms offer new ways to learn, to collaborate, and to develop capabilities—and to showcase talents to potential employers.

Small and midsize enterprises (SMEs) that join online marketplaces are taking advantage of this potential to scale up rapidly and connect with customers and suppliers anywhere in the world. Facebook estimates that its platform includes more than 50 million such companies, up from 25 million in 2013—and some 30 percent of their fans are cross-border. Amazon now hosts some two million third-party sellers. The share of SMEs that export is over seven times higher on eBay than among offline businesses of comparable size. PayPal enables cross-border transactions by acting as an intermediary for SMEs and their customers. Microenterprises in need of capital can turn to platforms such as Kickstarter, where nearly 3.3 million people, representing nearly all countries, made pledges in 2014. The ability of small businesses to reach global audiences supports economic growth everywhere. 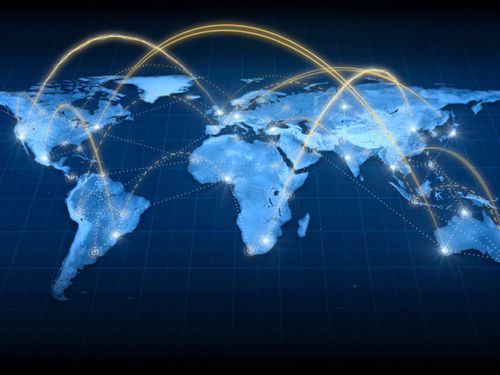