Home Archives Subscribe
Globalization: What the West can learn from Asia
Challenges to Facebook International Strategy - The India Case

It is not surprising that South-Korea, fourth largest gaming market in the world, is also seeing a surge of this phenomenon called Pokémon Go, a smartphone game that mixes a classic title with virtual reality. I guess Sokcho's business will do well, at least for a few weeks

South Korean Pokémon Go players have been forced to leave their home towns and flock to a remote city close to the North Korean border in order to play because of the country’s mapping restrictions.

As a location-based game augmented reality game, Pokémon Go relies on data from Google Maps to function, but South Korean security restrictions on mapping data have blocked Google from providing map features across a significant proportion of the country, including realtime information, 3D maps, personal transport directions and indoor maps.

“Due to government restrictions on maps data, it’s impossible for Pokémon Go to work properly using Google Maps service in South Korea,” a person familiar with the matter told Reuters.

However, a city close to the border with North Korea, called Sokcho, has not been classified as a South Korean territory and therefore has the mapping data required to make Pokémon Go function.

One user posted on an internet message board: “I didn’t go to some big tourist attraction; all I did was walk around for tens of kilometres to play a game. But I’m more satisfied with this than any other trip. I would still be in Sokcho had it not been for an urgent issue.”

Bus tickets from the capital, Seoul, to the city have sold out, according to reports.

Sokcho, which sits on the eastern coast adjacent to the Seoraksan National Park, has been quick to capitalize on its unusual status, sharing maps of free Wi-Fi areas and advertising itself on social media as “the only Pokémon Go holy land on the peninsula”. 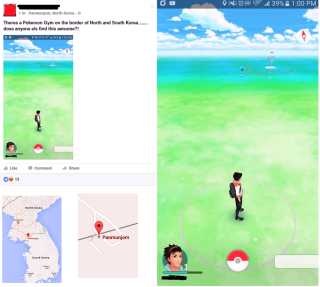