Crossing the Line: Facebook Struggling to Grow In Japan

This is a good analysis of the current competitive situation of "social networks" in Japan (as of the end of 2015, and still valid in August of 2016). It is interesting to see how a local service like Line has grown to dominate the Japanese market, while Facebook, a worldwide leader, has been struggling to grow in that market.

Such difficulties in growing in Japan are not surprising - especially if we have into consideration that other internet giants like Yahoo! and Google have also struggled to grow in that market. If we take the Yahoo! example, who only succeeded after creating a joint-venture with a local Japanese bank, a few questions come to mind: What will be Facebook strategy to grow in Japan? Will they join forces with a local player in Japan?

With about 40 percent of Japan’s entire population using it every month, LINE is the undisputed leader. Launched in 2011, the mobile social messaging system first launched in response (so the typical explanation goes) to the Tōhoku earthquake

and tsunami that year. The disaster ravaged Japan’s phones and cellular networks, but left much of Internet connectivity intact, prompting NHN Japan employees to quickly prototype and release LINE as an alternate communication platform. LINE’s ascendance is also attributable to Japan’s telecoms, which make their customers pay for SMSes, and charge smartphone callers up to a dollar a minute. LINE’s Skype-like VOIP chat, by contrast, is free.

Not only the default messaging app of Japan, LINE also rolled out a number of product features no one else had, like stamps — basically, high-resolution and high-concept emojiis. While the app is free to use, the stamps are bought as in-app purchases, and remain the company’s core revenue stream, forecast to earn it over $800 million this year alone (it earned $247 million in Q3 2015 according to the recent earnings report). LINE is expanding beyond stamps however, having recently added an Apple Pay-like service, a Spotify competitor, and an Uber-ish taxi feature.

After some early stumbles, Facebook is finally getting traction in Japan and is now used by about 17 percent of the entire population, primarily by people in their teens and twenties and by Japanese who live/travel overseas. However, Facebook in Japan is not the Facebook we in the West are used to, due in great part to Japanese culture, which frowns on public expressions that may seem boastful (for example, posting selfies from a beach on Maui). Facebook’s insistence on real-name-only accounts makes Japanese even more reluctant to express personal opinions on the social network.

Consequently, Japanese are much more likely to treat Facebook as their professional face, emphasizing their work experience and business connections — like LinkedIn. For that reason, it’s not uncommon for Westerners to get random friend requests from young Japanese users whose photos depict them in sober business clothes. They’re not actually seeking friendships per se, they’re networking. 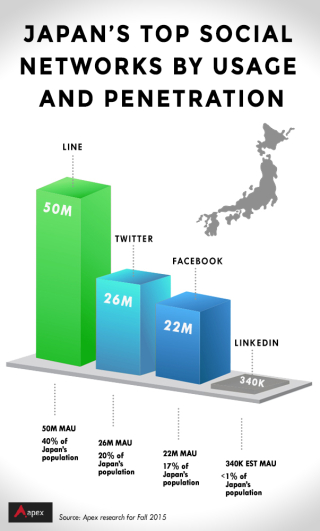