China, together with Japan, Russia and, in a lesser degree, India are, for different reasons, very challenging markets for foreign companies. Look at Facebook, Yahoo! (at their peak years), Google, Apple and other large companies, and history will show how hard it was for them to establish a market share similar to what they had in other markets, if at all.

In some cases, like Yahoo! did in Japan (partnering with Softbank to build their local audience) or in China (where it invested in Alibaba, a local brand, and closed their own operations), the best option is to be realistic, and either partner with a local player, or simply get out of the challenging market (like Google did in China) - and, ideally, companies would do it before spending billions on their failure.

Uber spent USD $2 billion, and said "enough". While for some that amount sounds like too much to invest in such a challenging market, for Uber it was probably acceptable, given the (potential) return on investment, and especially given that now they own a stake in the largest Chinese ride-sharing service (one that they directly helped grow through a billionaire competition).

Therefore, it might be naïve on my side, and I do not have any information on it to be more than speculative - but I would not be surprised if, years ago, when defining their strategy for China, some people at Uber already thought of this possibility: "let's spend billions over there, and, eventually, we will either win or partner with the winner - a win-win situation".

If that was the case, we would probably be better off by changing this article's title to "Uber to Sell China Business to Rival Didi After Investing Billions".

Didi will buy Uber’s brand, business and data in the country, the Chinese company said in a statement. Uber Technologies and Uber China’s other shareholders, including search giant Baidu Inc., will receive a 20 percent economic stake in the combined company. Didi founder Cheng Wei and Uber Chief Executive Officer Travis Kalanick will join each other’s boards.

The truce brings to an end a bruising battle between the two companies for leadership in China’s fast-growing ride-hailing market. Uber has been spending at least $1 billion a year to gain ground in China, while Didi offered its own subsidies to drivers and riders to build its business.

“Didi Chuxing and Uber have learned a great deal from each other over the past two years,” said Cheng, who is also CEO, in the statement. “This agreement with Uber will set the mobile transportation industry on a healthier, more sustainable path of growth at a higher level.”

Last year, China’s ride-hailing leaders Didi and Kuaidi joined forces, creating a homegrown juggernaut to fight off Uber. The merged company Didi Chuxing brought together backers Alibaba Group Holding Ltd. and Tencent Holdings Ltd., the country’s most valuable internet businesses. Apple Inc. joined in this year with a $1 billion investment in Didi, in a round that valued the company at about $28 billion. The Chinese government passed a new rule last week that legalized ride-hailing services, paving the way for further expansion of these businesses.

Uber’s investors had been clamoring for the company to sell off its China assets and focus on more promising opportunities. Uber has lost more than $2 billion in the country, people familiar with the matter said. “As an entrepreneur, I’ve learned that being successful is about listening to your head as well as following your heart,” Uber's CEO Kalanick wrote in a blog post. “I have no doubt that Uber China and Didi Chuxing will be stronger together.”

The deal is subject to government approval. While the combination of the top two players in a market would often raise regulatory scrutiny, officials will have to determine the range of competition. "The ministry of commerce has to define the size of the market and see if the car-hailing business Didi and Uber are offering can be replaced by similar services,” said Deng Zhisong, senior partner at Beijing-based law firm Dentons. “If you count taxi services and public transportation, the car-hailing sector will not have a market share that significant.”

In China, Uber ventured where few U.S. technology companies have succeeded. In 2005, Yahoo! Inc. made a similar deal, selling its businesses in China to Alibaba, along with a $1 billion investment -- one of the Silicon Valley company’s best bets.

"China is such a tough market, in terms of regulation, competition and culture; they (Uber) faced challenges on so many fronts," said Li Yujie, an analyst at RHB Research Institute Sdn in Hong Kong. "Cooperating with rather than fighting Didi might not be such a bad idea."

While Uber will walk away from operations in China, it is taking a significant stake in the largest player there. By shedding its massive losses in China, the move could help Uber clear the path for an eventual initial public offering. 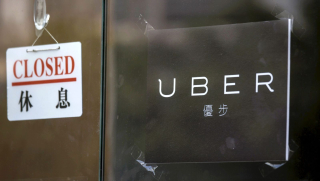